Known as having the most unsettled weather - in almost anywhere, Copenhagen, Denmark isn't the obvious choice for a city break in February but we went for it anyway. 3 girlfriends, 2 nights, a ryanair flight and an Air bnb...

Arrived, only half hour late- not bad Ryanair, at around 1pm on the Friday. Nice short 20 minute train journey into central station and we were 20 minute walk from our apartment. One straight road and we found the pretty hip cafe we were picking the apartment key up from. First time using airbnb and so far so good. The perfect English spoken by the nice girl who helped us, encouraged us to forget we weren't in an English speaking country. We found the apartment (building) easily then fell at the first hurdle of finding the actual flat. No numbers or names or the identical front doors. After 10 minutes of trying front door's to see if the key fitted, a stranger pointed us to the right door. Lovely, bright, homely apartment. By homely i mean, bread and milk, the biggest jar of mustard i have ever seen, meat and cheese in the fridge- for our consumption i don't think but it was nice anyway- toys and a cot in the living room. Clearly lived in a lot of the time. It was clean however and we had plenty of space. One bedroom with a double bed and a second bed on the living room floor ( i took this and was very comfortable), a nice little kitchen and a contemporary dining room.

Hungry, we headed back to the hip cafe for some fuel for the rest of the day. I had a ' Danish Hen Salad' which was shredded roast chicken in a creme fraiche sort of dressing and almonds and some gorgeous rye bread (you cannot get this nice stuff at home) After lunch and a beer and some map reading, we set off in search of the Tivoli Gardens. They were closed. Not open until April- nooooo!! Bear this in mind folks if visiting! We were all looking forward to the focal point of the city. Moving on.

Instead we did some wandering, got our bearings. We passed the National Archive building, parliament buildings and ended up in the shopping area. All the usual suspects- H&M, Topshop, Zara, Vera Moda. This area wasn't too over powering though and felt like a side street rather than a mammoth street of shoppers taking over the city. A few independent boutiques and quite a few naff souvenir shops also lined the streets. Lots of candle lights and fairly style lighting all around, wherever you go. This is a thing - its called 'Hygge'- which refers to the cosy atmosphere they create in the winter months with candles, lights and blankets. I like that they transform the dull rainy days into something lovely and welcoming. Even the cafes still had chairs and tables outside- just with blankets at the ready.

Next we walked up to the top of the Round Tower, a 17th century building that was built as an astronomical observatory. When it was built Denmark was known for its achievements in astrology through Tycho Brahe - a scientist who put a lot if time and effort into the research. When he died the King wanted to continue his legacy and the Round Tower became what it is today- near enough. Great 360 views of the city up one big spiral walkway, no steps. Until the very top and then there are only a few. 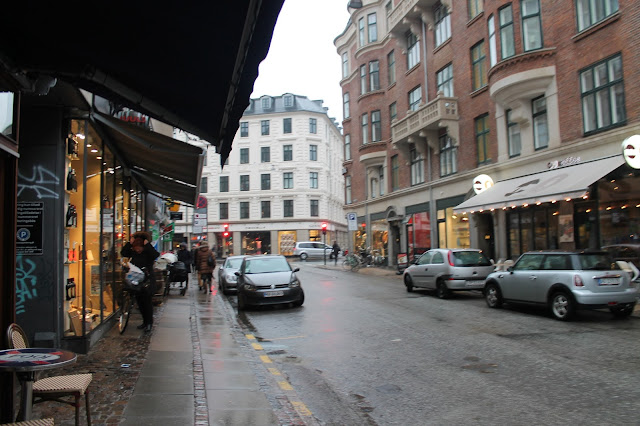 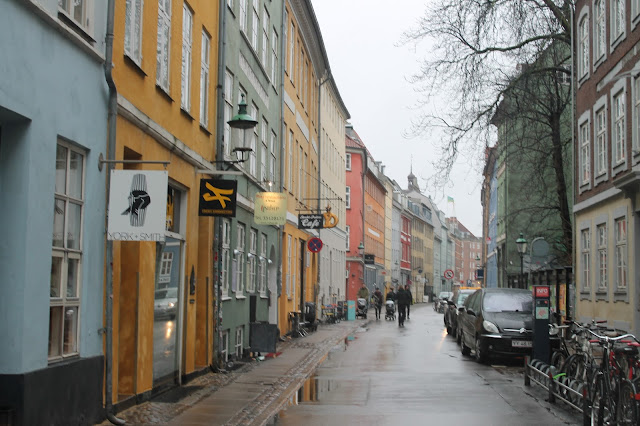 We then indulged in coffee & cake in the oldest and probably the best patisserie in Copenhagen, founded in 1870. http://www.laglace.dk/. Traditional inside and out, stunning cakes and coffee, friendly staff who are clearly proud of the popularity even if a little knackered. We were quite late in the day so they were shutting up as we left but the cakes- oh my, delicious. At a price though- the coffee alone was about 5 pounds. Lovely however and worth a visit!

That evening we took a recommendation and ate at a burger joint, yes a burger joint but not what you're thinking http://cafe-sokkelund.dk/#_=_ white table cloths, lovely wine, super tasty burgers. This place had Hygge down to a T and we really enjoyed the ambiance here, the fair stroll back to the apartment was welcomed to help it all go down!

The following morning we went for breakfast at Granola, this came personally recommended and also guide book recommended. Again a popular spot that has clearly been doing its thing for a number of years and hugely liked by tourists and locals alike. Tiny inside and heaving. We ordered, coffee, eggs cocotte with sausage mushrooms and a tomato sauce with Tabasco on the side, the girls also had pancakes and i had a pink grapefruit which came with a sprinkling of sugar and fresh mint- so delicious. We soaked up the atmosphere for as long as we could- it was also chucking it down and we were putting off leaving.

We ventured back towards the Old city for our bike tour we had booked with Mike the Bike, this is a must if you go. We did it in the worst possible conditions so no excuses! It was cold, very wet and windy. Mike even warned us it wasn't going to be pleasant and off we went! There 10 of us including Mike. We did the city tour which covered the following; University, Cathedral, Kierkegaard, Foodmarket, Naval Village, Design Museum, Citadel, Little Mermaid, Royal Palace, Nyhavn, central Harbour, Castle Island, Christiansborg (Danish Parliament), Royal Reception Rooms, Medieval Town.

We covered a lot, and Mike was very knowledgeable. Here are a few facts we learned on the tour;

Denmark's monarchy is one of oldest there was and they love it like we love ours in England.
Copenhagen University is a member of the International Alliance of Research Universities (along with Cambridge and Yale)
You have to have a bell on your bike by law but never use it and it annoys the locals too much.
The Little Mermaid iconic statue based on the fairy tale of the same name by Hans Christian Anderson is actually only famous because it was mentioned in a pop song. Would be like Justin Beiber now.
Copenhagen is the childhood home of author Hans Christian Anderson.
Nyhavn is postcard Copenhagen and is where a lot of the film The Danish Girl was filmed.

We were soaked through but was well worth it, for 30 pounds you get the 3 hour tour and the chance to master the streets of Copenhagen on a bike! We headed to the nearest bar for a beer and to soak up the 'Hygge' and get the feeling back in our toes. 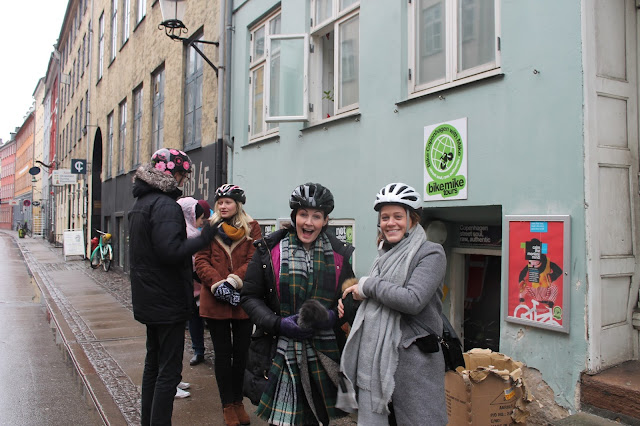 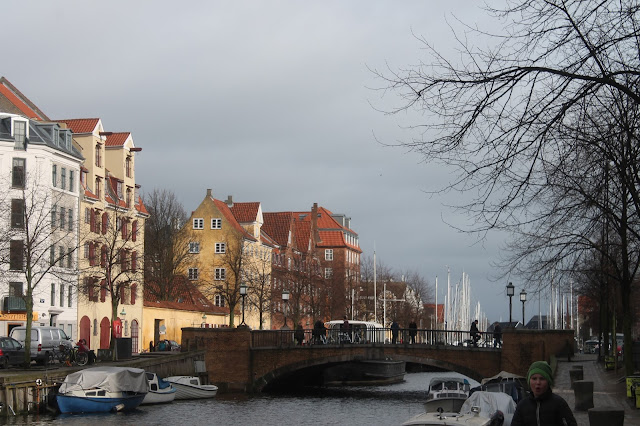 That evening we dined at Pony- a contemporary small restaurant which again was personally recommended. We had a 4 course set menu of fish eggs and smoked cream cheese, pickled Pollock, pork neck with parsnips and to finish off it was poached pear with pear sorbet. All absolutely deliciously light and flavorsome and didn't feel hideously full after it. We ended the evening with a cocktail or two at a bar called NOHO in the Meatpacking district which was a stones throw from the apartment- very handy. I was wearing a mustard coloured dress- i stood out like a sore thumb. They definitley like their black, grey, black oh and grey. Stylish but no colour to be seen, complete opposite to the city itself. I did ask Mike the Bike if there is a significance of the couloured buildings, there isn't really its just that they like their homes to look nice apparently and painting them is a way of getting the community together.

Day 3 and we were heading back to the airport at 2pm. We decided to grab a coffee and head to Christiana for a little look. Christiana is the self proclaimed autonomous neighbourhood which is regarded as a sort of commune and has its own special law, You can't take photographs here and you feel a bit like you're being watched. It is somewhat controversial, cannabis trading was tolerated until 2004.

We sadly didnt have time for a smørrebrød a danish open sandwich but that and the Tivoli Gardens is a good enough reason to go back. I would, lovely people, great food, plenty of culture and awesome architecture. Perhaps in the summer though.